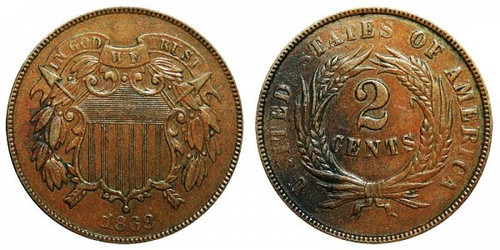 This was a short-lived coin with a unique use. Two Cent Pieces were minted during the Civil War and are the first coin to ever have the words "In God We Trust" on it! Now, we can't think of American coinage without it.

Each year, less and less 2 Cent Pieces were minted as the 5 Cent Nickel gained popularity due to its more useful denomination which resulted in very few Two Cent Pieces ever being minted. Why use 5 two cents when you could use two nickels? Once the mint ceased production of these in 1873 and was actively melting down these coins, they instantly became collectible! Every collector needs this under the radar coin!

1963 Franklin Half Dollar Choice Proof - Last of its Kind