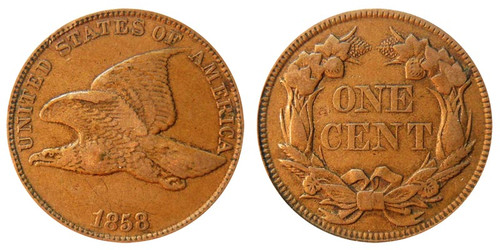 The Flying Eagle Cent was produced for one of the shortest time frames that a U.S. Coin has ever been produced. Only 40 million coins were ever minted, as compared to hundred of millions or even billions of pennies as seen today. This was the first ever small cent produced by the U.S. Mint, after it was realized that minting the Large Cent was no longer economically feasible. This began the trend of the smaller penny as we know it!

These coins were met with huge success when originally issued due to their convenience and are widely collected today! Collectors love the patriotic eagle on the obverse and the bundle of fall foliage on the reverse. You will receive (1) coin in circulated condition. Just think of all the history this coin has been through!