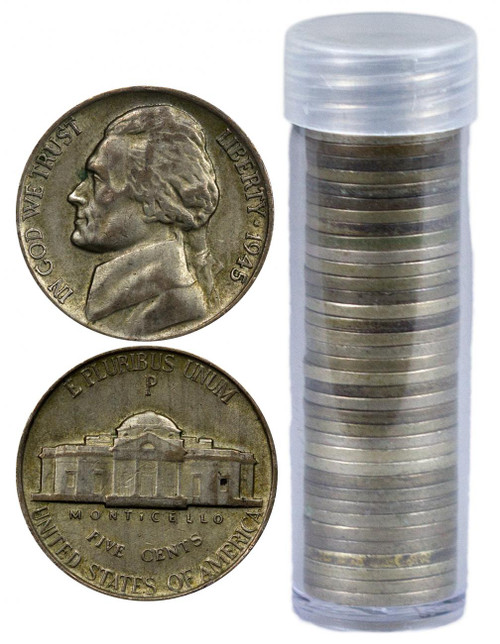 War Nickel coins were produced between 1942 and 1945. Prior to World War II, nickels typically comprised of 75% copper and 25% nickel. However, this range of special coins was made from 35% pure silver, which is equivalent to 0.0563 troy ounces, 56% copper, and 9% manganese. Nickel was rationed for the war effort, resulting in these exceptional nickel-less "nickels"!

The unique composition of these coins and the high silver content means the war nickel value is highly collectable. This roll of 40 35% silver Nickels are a variety of dates from 1942-1945. This is an affordable way to add silver to your stack, and the history behind these is a bonus!

During the Second World War, many foods, items, and materials were rationed due to limited imports and armor and artillery needs. At this time, nickel was one of the most commonly used materials for armor plating and was strictly rationed. For this reason, Congress ordered the US Mint to cease the use of nickel in coins. Therefore, all five-cent coins struck between 1942 and 1945 contain silver, copper, and manganese rather than nickel.

To distinguish regular nickels from silver war nickels, a mintage mark was added above the depiction of the Monticello plantation on the reverse side of the coin.

Due to the high silver content of War Nickel coins, their intrinsic value far exceeds their face value of five cents. One War Nickel can reach a value of anywhere from $1 to upwards of $1,000 for coins in perfect condition.