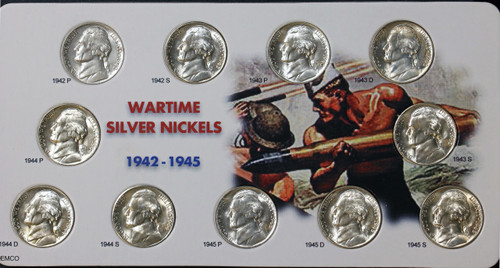 For a few years during World War II, nickels were actually...silvers! This is an attractive and valuable set that contains 11 silver nickel coins that were produced during WII. Between 1942 and 1945, nickels were minted using 35% silver as the government used nickel to produce military supplies during World War II. After the war was over, silver was no longer used in nickel production.
This represents a COMPLETE SET of every silver nickel produced due to WWII! You will receive every coin from every Mint that produced them from 1942-1945! Each is in exceptional, brilliant uncirculated condition and comes housed in this stunning display!
Highlights

Bullion Shark is offering coin collectors a unique opportunity to own a complete set of Wartime nickels in a stunning display. The display case features an attractive, retro wartime image. All coins are in excellent uncirculated condition (MS63+). They have been minted at various US Mints between the years 1942 and 1945.

The Jefferson Nickle minted between 1942 and 1945 is sometimes known as the silver war nickel. This nickel coin was first minted in 1938 and was initially struck from 75% Copper and 25% Nickel. During the war, they were minted using Copper and silver.

The silver war nickel’s design is the same as that of the Jefferson nickel. It has a bust of Jefferson on the obverse and Monticello, Jefferson’s home on the reverse. Silver war nickels can be distinguished from other nickels as they contain a ‘P’ ‘S’ or ‘D’ mint mark to indicate that they were struck in either Philadelphia, San Francisco, or Denver mints. Coins that don’t have mintmarks aren’t Silver War Nickels.

Silver war nickels are highly sought after and collectible. They are not only valuable but also have a fascinating historical significance. During wartime years, between 13,938,000 and 271,165,000 coins were minted annually. The value of the Silver War Nickel depends on its condition, year issued, and mintmarks. War nickels are valued at approximately $7 to $150 apiece. A 1945-P Doubled Die Reverse war nickel sold at auction for more than $5,500.