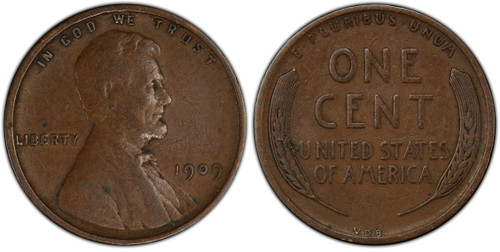 The 1909 Wheat Penny has a scandalous reputation in the numismatic history of the U.S. The first year of minting these coins resulted in the designer Victor D. Brenner's initials "VDB" being prominently struck into the coin's reverse. Newspapers across the country abhorred the tackiness of his initials on the coin! The uproar caused the U.S. Mint to quickly remove that design feature. Thus, these "VDB" Lincoln pennies are quite the collector's item, since they were only struck for a few months in 1909, and then never again.
The Official Redbook values this piece at roughly $15 in this condition. This is a chance to get this piece at 33% less than what is is valued at in the Redbook. Even though this is not the ultra-rare 1909-S VDB Wheat Penny, it is exactly the same just without the "S" mintmark. You will receive (1) coin in circulated F-VF condition. Grab your own 1909 VDB Wheat Penny at an absolute steal today!
Highlights

*Please note the "VDB" may be faint on some pieces due to their age and circulation."