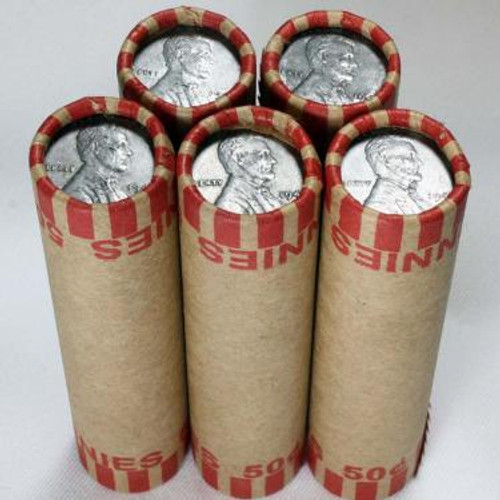 The 1943 Steel Penny is a unique coin in its own right. Collectors love this coin because it was the only year a penny was made of steel and not copper. The reason for this was due to the war. During this time, the United States needed every ounce of copper they could get their hands on to make ammunition and military supplies. A few copper examples were accidentally produced in 1943, however less than a 40 are known to exist and examples can easily run hundreds of thousands of dollars. The 1943 Copper Penny is one of the major rarities of all time.

The 1943 Steel Penny was originally designed by Victor Brenner. The obverse of the coin featured a side portrait of former president Abraham Lincoln. On the reverse two wheat stalks that surrounded the words "one cent". The reverse design is the reason why many coin collectors call the penny "wheatie" or "wheat cent".

A total of 684,628,670 1943 Steel Pennies were minted, making it a common coin in the Lincoln Cent Series. The coins were produced at the San Fransisco, Philadelphia, and Denver mints. Steel Pennies often range in value from a few cents to $20 or less a coin for really high quality mint state specimens. Even a stunning MS 65 Steel Penny Set can be found for less than $100.

Each 1943 Steel Penny was made of steel and coated with zinc. Often devious people tried to pass the 1943 Steel Penny off as a rare 1943 copper penny by coating it with copper. However, you can easily tell if the coin is the true rare 1943 copper by using a magnet. If the magnet picks up the coin then it is just a 1943 steel penny plated in copper.