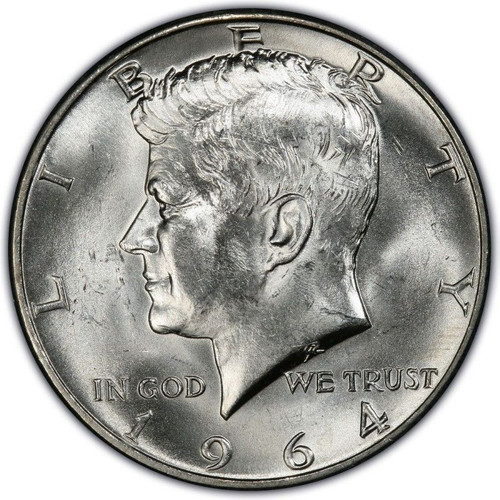 Own the original version of one of the most recognizable coins in American history with this 1964 Kennedy half dollar in brilliant uncirculated condition. As part of the first year's run, this coin consists of 90 percent silver and 10 percent copper, making it distinct from Kennedy half dollars of later years.

When did the coin originally enter circulation?

The Kennedy half dollar was first released mere months after the November 1963 assassination of President John F. Kennedy in Dallas, Texas. Leadership at the United States Mint began work on plans for the coin within hours of Kennedy's death. Jackie Kennedy was personally responsible for choosing the half-dollar denomination, and the coin was released to the public in March 1964.

Why are some Kennedy half dollars incorrectly dated?

Due to a combination of the coin's massive popularity as a collector's item in a still-grieving nation and the heavy silver content of the 1964 edition, the Treasury Department found it difficult to keep in the coin in steady circulation. Silver prices were rising at the time, which meant the coins had more value when melted down for the raw material than when used as currency.

The Treasury used a two-pronged plan in an attempt to fix the issue. First, it received authorization from Congress to keep printing 1964 Kennedy half dollar coins during the early part of 1965. This resulted in the originally planned run of 91 million 1964-dated coins ballooning to 430 million in the end. Secondly, in 1965, the US Mint switched the material composition from 90 percent silver and 10 percent copper to a mix of 40 percent silver and 60 percent copper.