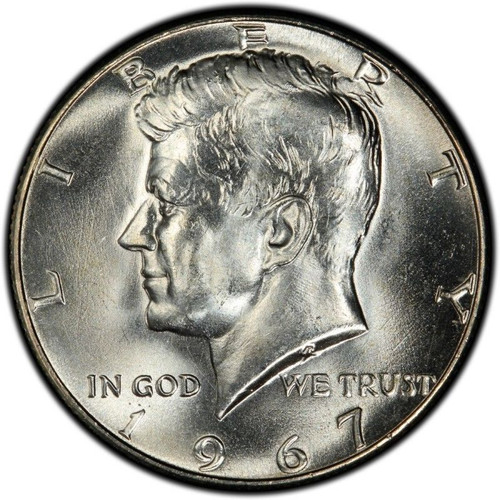 Expand your coin collection or create unique art with this roll of 1967 Kennedy half dollar coins in brilliant uncirculated condition. This roll contains 20 Kennedy half dollars made of 40 percent silver and 60 percent copper. Designed by Frank Gasparro and longtime Chief Engraver of the United States Mint Gilroy Roberts, this gorgeous piece of American history features sharp lettering and detailing.

History of the Kennedy Half Dollar

The Kennedy half dollar entered circulation quite quickly after President John F. Kennedy was assassinated on November 22, 1963. In fact, discussions about such a commemorative coin started the same day, and the bill that officially authorized the minting of the coin passed Congress before the year was out. The half-dollar denomination was chosen by Kennedy's widow, First Lady Jacqueline Kennedy.

The coin's first strike came on February 11, 1964, with the coins entering public circulation a few weeks later on March 24. However, many of the Kennedy half dollars immediately fell out of circulation due to collectors and mourners saving them as souvenirs; the Treasury Department sold its entire stock of 70,000 coins on the first day.

How much is a Kennedy Half Dollar worth

Kennedy Half Dollars can range in value from a couple dollars to thousands depending on the quality, year, and rarity. On a whole, 1967 Kennedy Half Dollars are affordable and can be found in stunning brilliant uncirculated condition for less than $15 a coin.