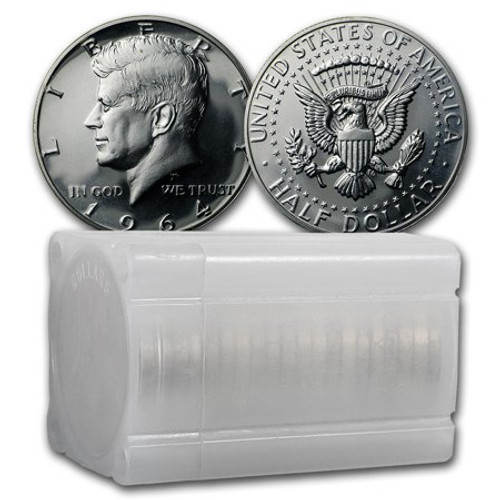 The Kennedy half dollar came into circulation in 1964 following the assassination of President J.F Kennedy. This set contains twenty Kennedy Half Dollar GEM Proof coins in brilliant condition. You’ll receive coins from a variety of years, depending on Bullion Shark's inventory.

These coins come packaged in a roll of twenty and will be safely and securely delivered to your home.

In 1963 the world held their breath while waiting to find out the fate of American president J.F Kennedy. A few hours after he had been shot in Texas, it was announced that he had died, having been rushed to the hospital. The nation went into mourning, and it was decided that a commemorative coin should be issued to honor the president.

The Kennedy half dollar was designed by Gilroy Roberts and Frank Gasparro. The coin's obverse features President Kennedy's head and the words ‘In God We Trust’ and ‘Liberty’ as well as the date of issue. The coin's obverse has an eagle holding olive branches in its talons and a shield. The coins circumference has the words ‘United States of America,’

The first Kennedy half dollars were struck using 90% silver and 10% copper. In the following years, the percentage of silver was slowly reduced as silver prices increased.

The Kennedy half dollar value depends on the condition of the coin; it’s year of issue and mintmarks. The 1964 Kennedy Half Dollar versions of the coin are the most valuable as they contain higher percentages of silver and are more collectible. 1964 coins are worth between $15 and $20 in uncirculated condition. With proof coins being valued at upwards of $25 depending on the year they were minted. Coins from other years are worth between three and six dollars apiece.