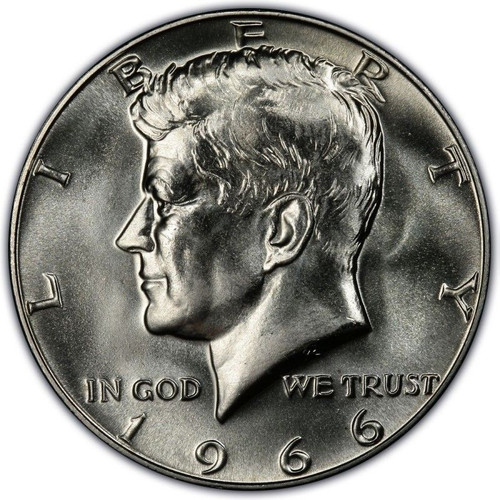 Manufactured in 1966, this version of the Kennedy Half Dollar contains 40% silver and 60% copper. Collectors invested in this coin despite its lower silver composition than previous versions.

Gilroy Roberts and Frank Gasparro designed the 1966 Kennedy Half Dollar. It was produced in large quantities at the Philadelphia mint and has a 30.61 millimeters diameter and a weight of 11.50 grams.

History of the 1966 Kennedy half dollar

The previous version of the Kennedy half dollar was minted in 1964 to commemorate the assassination of John F. Kennedy, the 35th President of America. The coin was released a month after he was killed and was hoarded by members of the public and coin collectors alike. This was due to their high silver content and expected historical value.

In 1966 a new version of the coin was released due to the massive shortage of half dollars in circulation. A lower percentage of silver was used in the coins, as it was hoped that this would stop people from hoarding them.

In 1966, two different kinds of Kennedy half dollars were produced. There was the regular-strike half dollar, which was minted in millions. A special mint edition set was also created with a mintage of just 2,261,583 coins.

The 1966 Kennedy Half Dollar is available in common grades up to MS64. As with all coins, it’s value will depend on the condition of the coin and the mintage and mintmark.

There are several hundred MS65, and the value of these is considerably lower than at other grades. MS66 is a very rare coin, and in mint condition has a higher value, it’s thought that there are less than two hundred coins worldwide in this condition. MS67 coins are even rarer and more valuable as there are probably less than twenty existing coins.