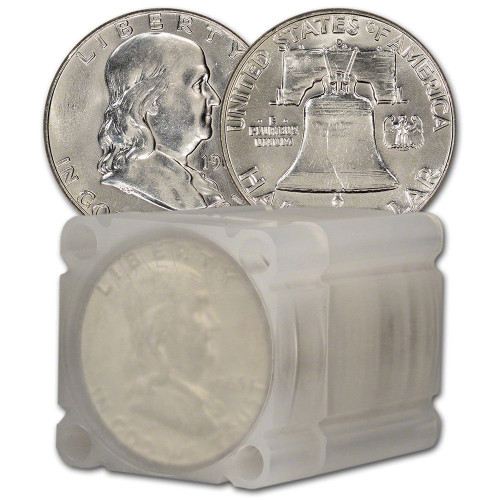 1963 was the final year that the American mint issued the Benjamin Franklin Half Dollar, making it a sought after collectors coin. These coins were struck using 90% silver and 10% copper and are in brilliant uncirculated condition.

This set comprises twenty Franklin half dollars from 1963 in high quality, MS60 grade or better. They have been carefully packaged into a roll and will be safely delivered to your home.

The Franklin half dollar was minted between 1948 and 1963. This coin series is relatively easy to assemble in circulated condition. However, if you’re collecting uncirculated coins, it’s more challenging to create a whole set.

This coin was designed by John R. Sinnock, the Chief Engraver at The United States Mint. The obverse features an image of Benjamin Franklin, which was based upon a statue of Franklin made by Jean Antoine Houdon.

The coin's reverse has a large Liberty Bell, similar to the bell used on the 1926 half dollar designed to commemorate American Independence. This coin replaced the walking liberty half dollar and wasn’t very well received by the general public, who preferred the previous half-dollar design. For this reason, not many people collected the Franklin half dollar, which has lead to its scarcity today in uncirculated condition.

Franklin half dollars were struck using 90% of pure silver. Today many coins are worth more due to their silver content than their value to coin collectors. This is particularly true of circulated coins.

The 1963 Franklin half dollar has been valued at $25 for a coin in MS60 condition. MS63 coins are worth slightly more. Proof coins from 1963 are worth up to $20. A whole collection of uncirculated coins in brilliant condition is worth up to $1,500 with one coin from each of the years it was issued. Over 22,000,000 franklin half dollars were minted in 1963 at the Philadelphia mint.