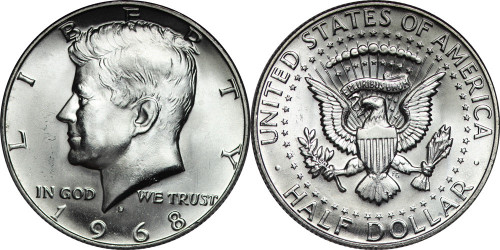 Acquire the 1968 Kennedy half dollar for a momento of the fallen and popular President John F. Kennedy from a significant point in history. That was the precise thinking when this coin went into circulation shortly after the former U.S. president's death in 1963 as people kept hold of their Kennedy halves in his memory, which meant there were hardly any in circulation until a new strike in 1968. Its original 1964 production contained 90% silver and 10% copper. This high silver content was taken down a year later until 1971 when it was reduced completely to clad. The 1968 Kennedy half dollar still contained 60% silver and 40% copper and each don a mintmark as all of this years' strike was minted in either Denver or San Francisco – none in Philadelphia, which didn't do mintmarks until 1980.

The coin was designed by Gilroy Roberts and Frank Gasparro, the U.S. Mint's most senior engravers. The coin is 30.61mm in diameter; it has an edge with 150 reeds and weighs 11.5g. Each coin is embossed with the president on the obverse side of the coin and the reverse bears the hallmarks of the Great Seal of the United States.

1968 Kennedy Half Dollar Value and Mintage

The 1968 mintage was high and it is still in circulation. Two hundred and forty-six million coins were minted that year, as well as 3,041,506 proofs of the 1968 Kennedy half dollar, which was the first year proofs were minted in San Francisco. Find an uncirculated gem with a mint state of 67, then you could sell it for $7,500. At least that's been the record sale price for this coin, in 2019 on the virtual auction site. Coins with a lower grade are worth between its face value of 50 cents and $25, again depending on its condition.