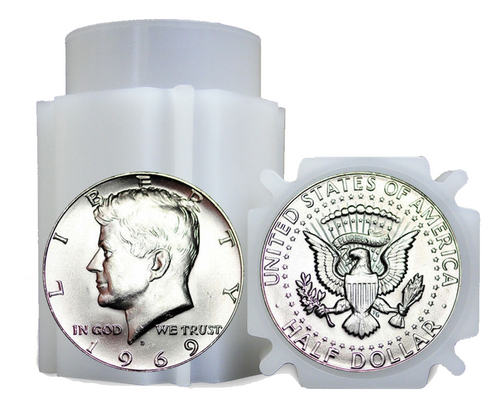 This 1969 Kennedy Half Dollar was the last year they were made of 40% silver and 60% copper. The Kennedy Half Dollar originally consisted of 90% silver in 1964, but its content was reduced in 1965 to 40% after the US Mint removed all silver from dimes and quarters. From 1965-1969 they still contained 40% silver, but by 1971, the silver content was reduced further to clad.

You will receive a roll of 20 Brilliant Uncirculated JFK Half Dollars from 1969! This is a great way to bulk out your silver collection for cheap.

The Kennedy Half was designed by Gilroy Roberts, who was the chief engraver of the US Mint, and assistant engraver Frank Gasparro. In order to speed up the rate at which they could distribute the coins, the paired modified their designs on the Kennedy Inaugural Medal.

Gilroy Roberts designed the obverse side of the coin, which features an image of John F. Kennedy with the word 'liberty' placed above his head and the phrase 'In God we trust' beneath. The reserve side, designed by Frank Gasparro, is an adaption of the Great Seal of the United States.

The 1969 Kennedy Half Dollar is 30.61 millimeters in diameter and weighs approximately 11.50 grams. The original weight of the coin stood at 12.50 grams. However, this reduced alongside the silver content.

The Kennedy Half Dollar immediately became a collector's item upon its release on March 24th, 1964. On the first day of the coin's circulation, the Treasury Department in Washington D.C. sold out of its 70,000 coins.

Bullion Shark is offering a set of 20, unspoiled and uncirculated 1969 Kennedy Half Dollars that are an excellent addition to any coin collection. Enhance your collection today.