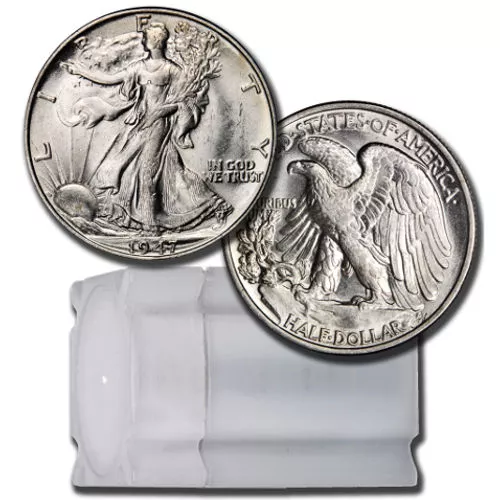 The Walking Liberty Half Dollar is one of the most iconic of all American coinage. This coin was minted in relatively low numbers, making it highly sought after by collectors and dealers alike. Coins in high grades are very rare.

This roll of twenty coins has been minted between 1916 and 1947; you’ll receive various dates depending on Bullion Shark's current inventory. This roll offers excellent value for the money and allows collectors to add multiple dates to their collections.

The walking liberty half dollar was designed in 1916, a time of transition for America, and was also the year when a significant change was made to America's coinage. Exciting new designs were created to represent America's history and independence.

In 1915 Robert W. Woolley, director of the American Mint, invited three sculptors to design an obverse for three different coins that were being created. Amongst them was Adolph A. Weinman, who designed the walking liberty half dollar. Weinman ended up designing two coins at the time, the dime and half dollar.

Weinman designed the obverse of the coin with a full-length Liberty walking purposefully towards a new day. A sunrise symbolized this. Liberty is wearing the Stars and Stripes and holding olive and oak branches, which represent freedom.

The coin's reverse features the image of a bald eagle that is perched on a mountainside with outstretched wings to represent power. Weinman's initials, AW, were placed underneath the eagle's tail feathers.

BU coins are valued at $35. Rare coins from years with low mintages are worth a lot more. Between 1916 and 1947, over 485 million Walking Liberty half dollars were minted. They were issued sporadically throughout the 1920s, with no coins minted in 1922, 1924, 1925, or 1926. Mintage was very low in 1921, and these coins, in uncirculated condition, sell for hundreds of dollars to tens of thousands depending on the grade.