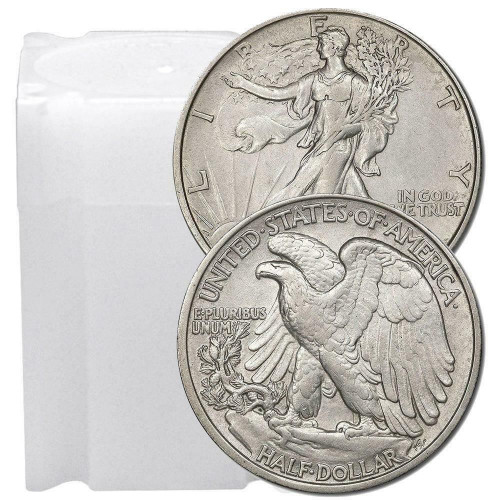 Walking Liberty coins are among the most recognizable and collectable U.S. coins. The U.S. Mint produced these coins from 1916 to 1947. Because they have been produced in smaller quantities than subsequent half dollar coins, they are highly sought after by collectors.

Walking Liberty coins are designed by Adolphe A. Weinman, a German-American engraver and sculptor. Each coin is made from 90% silver and 10% copper. They have reeded edges and each one weighs 12.50g. Each coin has a diameter of 30.00mm. These coins are famous for their detailed design artistry.

The obverse side of these coins depict a full view of elegant Lady Liberty. She is striding toward the sunlit horizon. Her arm is outstretched while her other arm holds full branches of oak and laurel--symbols of America’s glory. Above her head is the word ‘Liberty.’ Below her head is the year of minting. The motto ‘In God We Trust’ is engraved beside Liberty’s figure.

The reverse side of the Walking Liberty Half Dollar coins features a bald eagle with its wings outspread. The eagle sits atop its mountaintop home where a small pine sapling can be seen growing. The coin features the words “United States of America” above the eagle. The denomination of ‘half dollar’ appears beneath the eagle.

While the face value of Walking Liberty coins is fifty cents, these coins are worth more because they are silver. Moreover, they remain even more valuable to collectors of rare coins. Coins that are in good condition hold their value better than circulated coins in poor condition.