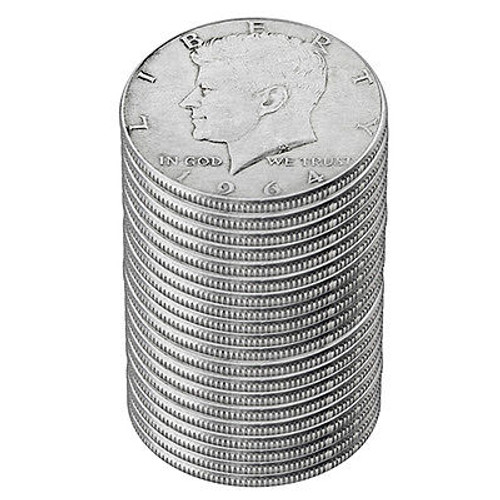 History of the 1964 Kennedy half dollar

The US Mint produced the first Kennedy half dollars in 1964, just a few months after the assassination of President Kennedy. The whole nation was in mourning and Congress quickly passed a law to end production of the Franklin half dollar and replace it with a new coin to commemorate the life of the Kennedy. Gilroy Roberts designed the obverse of the coin which features an image of Kennedy and Frank Gasparro created the American eagle on the reverse. The designs used were modified versions of those already created for use on the Presidential medal. President Kennedy had already approved the medal design before his death. The coin is still minted in the present day but it is now struck from copper and nickel. The 1964 Kennedy half dollar was minted in San Francisco, Denver, and Philadelphia.

Each 50 cent piece has a reeded edge, is 30.6mm wide, 2.15mm thick, and weighs 12.5g. Coins minted in Denver and San Francisco bear "D" and "S" mint marks. The obverse of the coin features an image of Kennedy looking to the left and has the word Liberty above his head. The reverse features an adaptation of the Great Seal of the United States which shows an eagle with spread wings holding an olive branch and arrows in its claws.

1964 Kennedy half dollar value and mintage

These coins were popular with collectors around the world and 273,304.004 were minted in 1964. A 1964 Kennedy half dollar is valued generally between $10 and $42 depending on the condition of the coin. Uncirculated coins have been known to reach over $100 at auction.