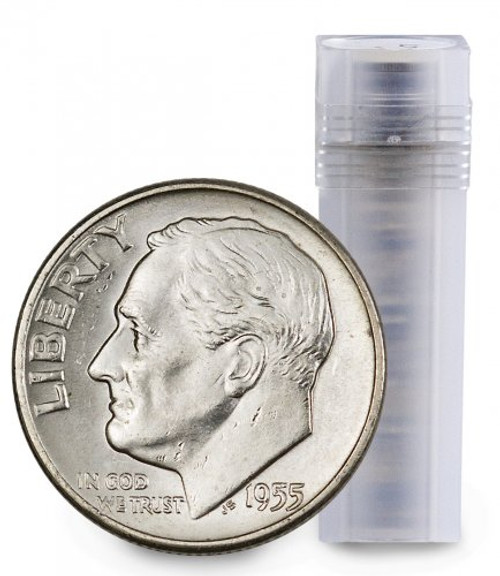 We are running a one day only special on 90% Silver Roosevelt Dimes. All coins are in Choice Brilliant Uncirculated condition! That means all coins grade MS63 or higher. The Redbook values a MS63 at $3 and a MS65 at $5. That means rolls are valued as high as $250. These coins are all in that grade range. Each roll has 50 coins and only costs $2.99 per coin. All coins will be silver, so they will be dated 1964 or prior. If you want these, act today. With the metals moving like they are, we likely will not be offering these at this price tomorrow...

The Roosevelt Dime was introduced in 1946 and is still being minted today. Between 1946 and 1964, these coins contain 90% silver. Modern coins feature the same design but are produced using nickel. The coin was designed to commemorate the death of President Franklin D. Roosevelt, who died of polio in 1945.

This roll of 50 Silver Roosevelt Dimes is an excellent way for coin collectors to add uncirculated silver coins to their collection. The coins are carefully packaged in a roll and sealed to ensure safe delivery. Each coin is in brilliant condition and has a lovely luster and exceptional detail.

These silver dimes were minted between 1946 and 1964 and contain 90% pure silver. You’ll receive a selection of dates as per the current inventory.

The Roosevelt dime’s obverse features a portrait of Franklin D. Roosevelt. While on the reverse is a flaming torch and an olive and oak branch. These three symbols represent America’s freedom, peace, strength, and independence.

The coin's designer is a debatable subject. Some believe that it was designed by John Ray Sinnock, the chief engraver of the US Mint. Others think that it was a sculptor named Selma Burke, who created the president's image. The initials of Sinnock appear on the first proofs and circulated coins in 1946. However, the image used on the coin looks almost identical to a base-relief given as a gift to the President by Burke five years before the coin was created. Soon after the coin was minted Selma Burke, raised claims that her image had been used to produce the coin.

Some of the Roosevelt dime key dates, including 1949-S Roosevelt Dime and 1950-S Roosevelt Dime, are valued at $40-50. Most coins sell for between $5 and $10 dollars, depending on their grade and condition. MS63 coins are valued at $5, while MS65 at $10. These dimes are considered fairly low value as they were minted in the millions each year.