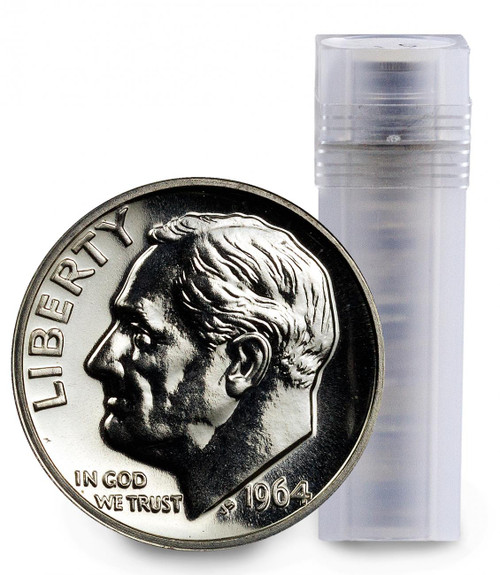 Who doesn't love a Proof? Proof Roosevelt Dimes are surprisingly hard to find. In fact even the most common of Proof Roosevelt Dimes is 235x as rare as the business strike version struck in the very same year! Not only are these coins more rare, but they are also even more stunning with their glossy finish! The Redbook values even the most common of Proof Roosevelt dimes at $5 per coin or $250 per roll in PF65 grade. You are saving almost 30% with our special pricing! You will receive a nice assortment of dates in the 1960's and all coins will be in GEM Proof Condition, meaning they are all around PF65 quality!

We bought these from a collector who bought old proof sets and then built these rolls himself! This means these coins are beyond pristine. This is the perfect way to add a ton of beautiful coins to your collection at an excellent price!

Proof coins are rare and beautiful as they have been produced with a glossy finish! They are valued at $5 per coin for the most common variety and up to $45 dollars for proofs of the earliest coins.

This roll contains fifty proof coins from a mixture of years in gem proof condition. They will be safely packaged in a roll and delivered to your home. This roll of fifty coins is a delight for any collector and is excellent value for the money.

The Roosevelt dimes were first minted in 1946 to commemorate President Franklin Delano Roosevelt’s death, who passed on the 12th of April, 1945. His death caused national mourning.

At the age of thirty-nine, Roosevelt was diagnosed with polio and spent many years raising money and awareness of the disease. During his presidency, Roosevelt started a fundraising event known as ‘the March of Dimes.’ It seemed appropriate after his death to feature his head on the obverse of a dime.

The Chief Engraver at the US mint, John R. Sinnock, designed the coin. It was made from 90% silver and 10% copper for almost twenty years before being changed to copper and nickel in 1965 due to rising silver prices. In 1992 the Mint started minting annual proofs and collectors’ coins in silver again.

The Roosevelt dime was minted in the millions so, it isn’t particularly valuable but is highly collectible. The early proofs are highly sought after and are collectible due to their rarity. Key dates include 1950, 1951, 1952.

Earlier proofs are considered more valuable, with the 1950 coin often selling for $45. Later proofs of this coin are likely to fetch $5 each. In general, top uncirculated grades and coins with full bands on the torch sell for more.