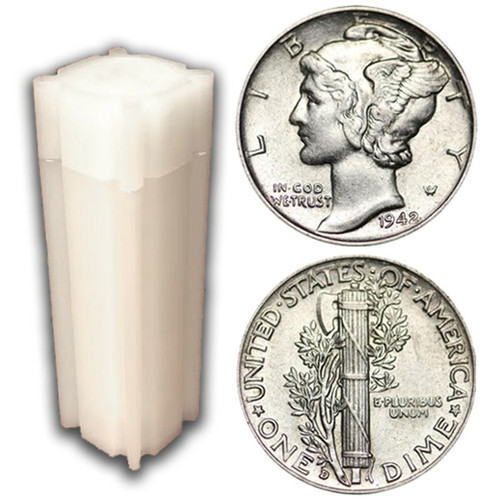 The Mercury Dime may just be one of the most collected and recognizable U.S. Coins of all time! Although many people think Mercury is whom adorns the coin's obverse, it really is Liberty with wings crowning her cap to symbolize the liberty of thought. These are stunning XF/AU quality silver Dimes! Each roll will have (50) coins and will have a nice mixture of dates. These are being offered at just $3.40 per coin! Don't forget silver is up about 100% this year! Get in while they are still cheap!

This roll contains fifty XF to AU quality Mercury Dimes minted in a selection of years. You’ll receive an assortment of coin dates in excellent condition at the higher end of the grading spectrum. The set is excellent value for the money and perfect for silver investors, collectors, and dealers. It’s also a great way for the novice collector to update their portfolio.

The mercury dime was initially named the Winged Liberty Head Dime but got its nickname as Liberty looks like the Greek God Mercury due to the winged hat shes wearing.

This coin was minted between 1916 and 1945 and has become one of the nation’s best-loved coins. Although not rare, the coins are of great interest to collectors worldwide.

The coin's design was created by sculptor Adolph A. Weinman and was minted during a colorful time in American history. This coin saw two world wars, as well as the Great Depression. During these years, there was much hoarding of silver coins and a rise in coin collection interest amongst the general public.

In XF condition, the cheapest and less sought-after dates have been valued at $5. Others are as high as $7-$9 or much more for proofs and uncirculated versions of the coin. The 1942 Denver-minted overdate and doubled die can sell for around $324. While a 1926 San Francisco minted coin recently sold for $6,250 at MS65FB grade.

The 1916D coin is rare and highly collectible, as are early versions of the coins. These sell for higher prices. Other key dates include years when there were low mintages, which make the coins scarcer today. This includes 1921D and the 1921 Philadelphia Mercury Dime, which had a mintage of just 1,230,000. The 1926 San Francisco verity is also sought after with prices starting at around $15 a coin. Other notable years include 1941 and 1942.