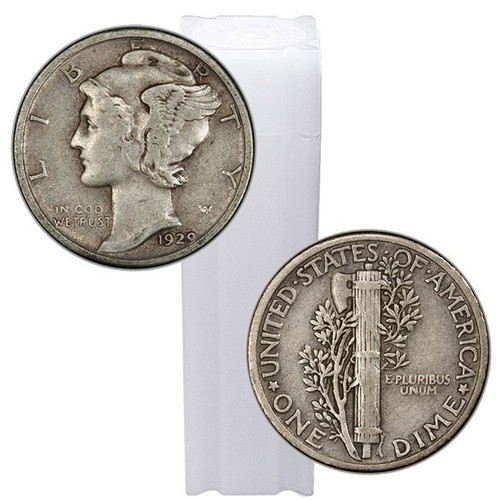 The Mercury dime is a rare and appealing coin that was minted from 1916 to 1945. It features an iconic design and is struck using a high silver content. Mercury Dimes in good condition are relatively scarce as less were minted than the Roosevelt Dime.

Struck between 1916 and 1945 using 90% silver and 10% copper, the Mercury Dime got its name as it features Liberty wearing a winged cap. This made her look very similar to the Roman God Mercury. This coin is also sometimes known as the Winged Liberty Head coin.

The Mercury dime was designed by Adolph Weinman to replace the Barber dime. The obverse features Liberty wearing a winged hat and the words ‘LIBERTY’ and ‘In God We Trust’ and the date. It’s thought that the designer used his tenant Elsie Kachel Stevens, wife of the poet Wallace Stevens, as a model for the coin's image.

The coin's reverse has a Roman fasces, which is made up of an ax, rods, and branches. A Fasce is a symbol of authority that was carried by Roman officials. The reverse has the inscription ‘United States of America’ around its circumference.

In circulated condition, the Mercury Dime is valued at approximately $4 or more. The coins detail often determines how valuable and collectible coins are likely to be. Coins that have full horizontal bands on the fasce are generally thought to be worth more.

Uncirculated Mercury dimes in good condition and with common dates are valued at between $8 and ten dollars. MS65 coins are likely to sell for $40 or more, and coins at the top grade of MS68 are worth $200 to tens of thousands depending on the date and mint mark.