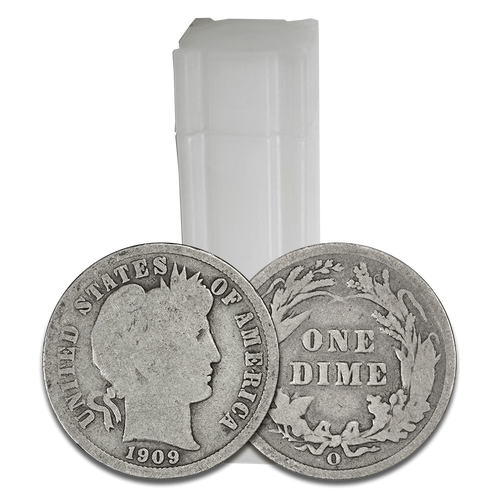 Barber Dimes are a very rare and highly sought-after coin that is challenging to find in any sort of quantity. They were minted in low numbers, which have made them a challenge to collect.

These coins have been carefully packaged in a roll of fifty coins, which are in circulated condition. Many Barber dimes that are sold elsewhere have illegible dates and are damaged due to their age. Bullion Shark has carefully collected Barber Dimes in good circulated condition. You’ll receive a nice mixture of dates in this roll.

The Barber dime was designed by Charles E. Barber, who was the Chief Engraver of The United States Mint. The initial "B" is found on all Barber coins. This Barber dime was struck from 1892 until 1916, when the mint replaced it with the Mercury Dime. The Barber Dime is a classic American coin design that is sought after by collectors worldwide.

The coin's obverse has the head of Lady Liberty facing towards the right. The words "United States Of America" curve around the top of the coin, and the date of issue is at the bottom.

The coin's reverse has a wreath made of laurel branches and ONE DIME in the center. Unlike most American coins, the Barber Dime doesn’t have the motto ‘In God, we trust’ as there was no room on the coin.

The cheapest Barber Dime is valued at $4 in the Redbook, while you are only paying $2.98 per coin here! The 1894-S Barber dime is the most sought after and rare as only twenty-four were minted at the San Francisco mint as proof coins.

The whereabouts of only twelve of the coins are known, and whenever they are auctioned, they sell for approximately $1 million!