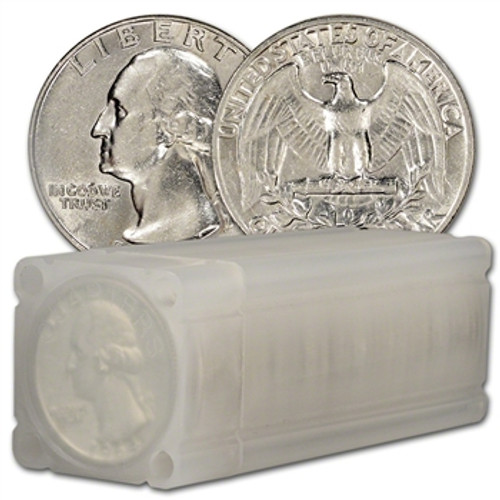 These rolls of Washington Quarters contain (40) stunning coins. All coins consist of 90% pure silver and are in Choice Uncirculated condition. This means they will grade between MS63-MS65. The Redbook values a MS63 at $9 per coin and a MS65 at $10 per coin. We are offering these for much less than their Redbook value at less than $7.5 each! Each roll contains 7.15 oz of pure silver! This is a great way to stack small denomination silver pieces that are easily divisible.

By buying these coins in bulk, you’ll receive great value for your money as Bullion Shark sells the coins at just $4.99 each! This deal will likely disappear fast!

In 1931 a competition was launched to design a coin to commemorate the 200th anniversary of George Washington’s birth. The coin's obverse had to feature Washington's image, and each of the 100 contestants came up with a design for the reverse of the coin.

Most of the coin designs received were considered to be amateurish. Some were good, and one stood out as being a clear winner in the Commission’s opinion. The coin's design was by John Flanagan and featured a golden eagle on the reverse.

The eagle is sitting on a branch with wings outstretched. The words ‘United States of America’ is featured at the top of the coin and ‘Quarter Dollar’ at the bottom. The coin's obverse has the head of George Washington and the motto ‘In God we Trust,’ as well as the word ‘LIBERTY’ and the year the coin was minted.