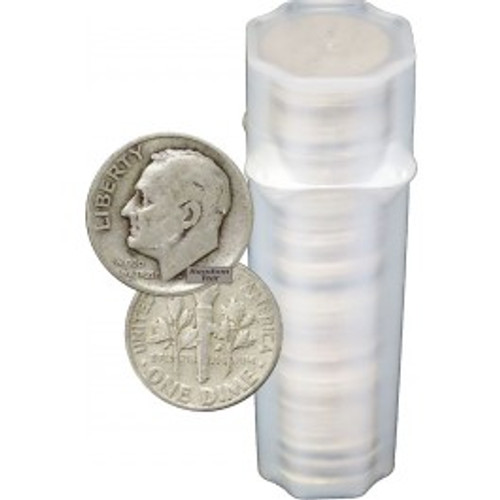 This roll of fifty Silver Roosevelt Dimes is a great way to add silver coins to your collection. Each roll has been carefully packaged and contains 50 coins, minted in 90% pure silver.

Although previously circulated, these coins are in good condition and will make a great addition to any collection. You’ll receive a selection of silver dimes from the years 1946 to 1964. The dates you’ll receive will depend on Bullion Shark's current inventory.

In 1945 the nation mourned the loss of President Franklin D. Roosevelt, and a coin was created in his honor. The coin was designed by the chief engraver of the US Mint, John Ray Sinnock. However, there were rumors that the image of the president's head used on the obverse was taken from an engraving done by sculpture Selma Burke without her permission.

Earl coins had the designer’s initials, JS, but these proved to be controversial. At the time, America was also under threat from the Soviet Union, and rumors began to spread that JS was used as they were the initials of the Soviet leader Joseph Stalin. Many Americans were alarmed by this threat of communist influence, and the Mint had to issue a statement that identified the coin's creator.

The Roosevelt dime was minted in the millions using silver each year between 1946 and 1964. For this reason, none of the years are particularly rare. Many collectors like to add coins to their portfolios that were issued in key dates when changes were made to the coin's design. In 1946 the initial JS was removed from the coin.

Most Roosevelt dimes sell for relatively low prices of between $5 and $10 dollars in circulated condition. The value always depends on the condition and grade of the coin.