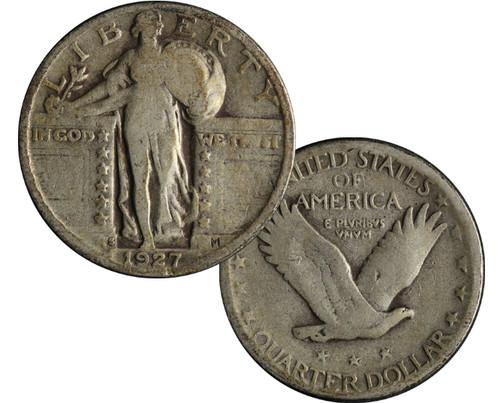 Bullion Shark is offering the opportunity for you to add one Standing Liberty Quarter in circulated condition to your collection.

The 1916 to 1930 Standing Liberty Quarter is famously known for its scandalous reputation. Also known as "The Scandalous Coin, the first design of the Standing Liberty Quarter features a standing Lady Liberty standing baring one of her breasts. The obverse side also featured Liberty holding a shield and an olive branch, while the reverse depicted a flying eagle and 13 stars.

At the time, this design by Hermon MacNeil was considered obscene and scandalous, causing enough outrage that the design was subsequently changed in 1917. In 1917, Hermon MacNeil revised his design and added a chain vest to cover Liberty's breast. It is still unknown why the original design included Lady Liberty's bare breast, but it has made for an excellent story and a very rare collector's item.

The 1917 design of the Standing Liberty Quarter remained in circulation until 1930 when it was replaced by the Barber Quarter.

The lowest mintage of the Standing Liberty Quarter occurred in 1916 as only 52,000 pieces of the bare-breasted Lady Liberty were struck. The highest mintage year for the coin occurred after the new design was instated in 1920 when 27,860,000 coins were produced for circulation.