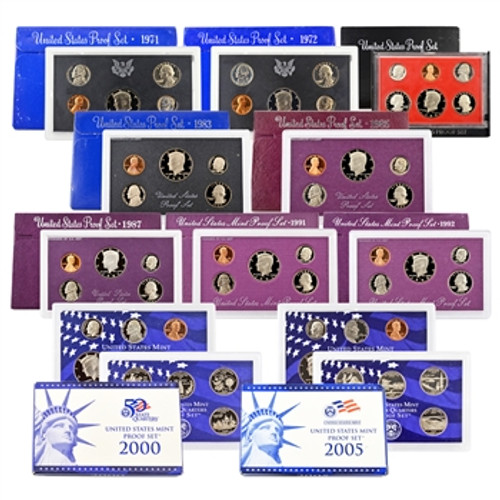 It wasn't until the 1930s that the U.S. Mint released Proof sets to the public. Proof sets are made of the coins struck that year in a Proof finish. The blanks are polished before being struck by ultra fine dies twice in order to get coins with razor sharp detail and mirror-like surfaces. This is what makes Proofs so desirable by collectors everywhere.

Proofs used to be rare and exquisite pieces used as diplomatic gifts! One of the most notable instances was a Proof Set gift to the King of Siam in 1836 from President Jackson. This assortment of sets includes some gems! The 1980 set includes the Susan B. Anthony Dollar, the 2000 Set includes the Sacagawea Dollar, and the 2005 set includes the re-issued Buffalo Nickel!