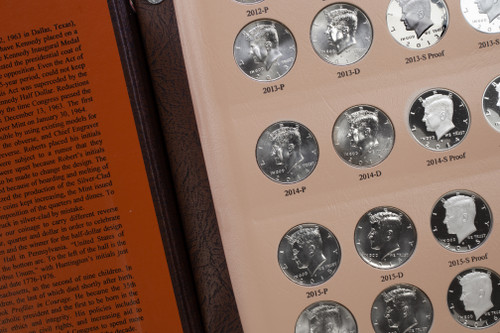 The Kennedy Half-dollar was brought into fruition in 1964 after the assassination of the former President John F. Kennedy. The first year of issue was struck in 90% silver and is highly desired by collectors. From 1965-1969, they were struck in 40% silver. Each year after, they were merely clad besides some Silver Proof Versions. Then in 2002, the U.S. Mint stopped minting circulating Kennedy Half Dollars altogether.
The keyword being circulating, as they continued to be struck for collectors as 40% and 90% Silver Proofs. This is the quintessential coin for collectors! This set contains every Kennedy Half released from 1986-2020, both regular strike and silver proofs, from the San Francisco, Denver, and Philadelphia Mints! That's a total of 194 coins. This complete set was assembled by our Vault Master over the past 4 months, hand-selecting only the best specimens! Save yourself the headache of finding each piece yourself with this amazing set!
Highlights:
×