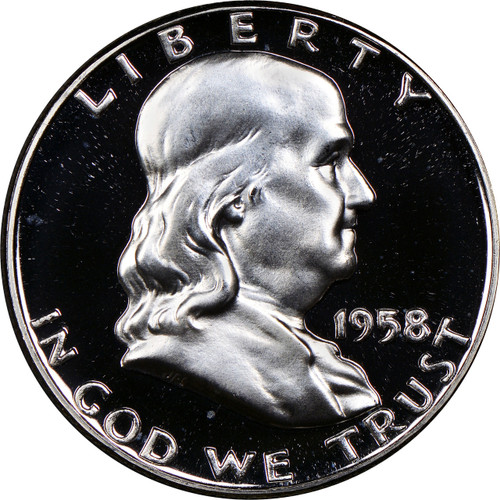 Make the most of your Franklin half dollar collection with this 1958 Franklin half dollar proof. The Franklin series was minted between 1948 and 1963 at all three mints – Philadelphia, Denver, and San Francisco. Proofs were minted from 1950 and only at the Philadelphia mint. The Franklins are popular as they are the last half dollar series to all be made with 90% silver, which adds to the stunning condition of Franklin proofs as they were minted for collectors, and are largely uncirculated and excellent condition.

The Franklin half dollar series was the first half dollar to include a portrait of a real figure – other half dollars had featured metaphorical figures signifying liberty. U.S. Mint Director Nellie Tayloe Ross long admired Benjamin Franklin and wanted the founding father on a coin. She asked her chief engraver to prepare the designs, which included worked based on an earlier medal crafted by Sinnock, the work of Jean-Antoine Houdon, and John Frederick Lewis. As Sinnock passed away before completing the work, Gilroy Roberts finished the designs.

The Benjamin Franklin half dollar coin features Franklin with his left side on display on the obverse and the Liberty Bell in Philadelphia on the reverse. A small eagle is depicted to the right of the bell, as a supposed afterthought to comply with a coinage bill requiring an eagle to be placed on all currency valued more than a dime. As the proofs were minted in Philadelphia, they bear no mintmark. Sinnock's inititals "JRS" are also featured just under Franklin on the obverse.