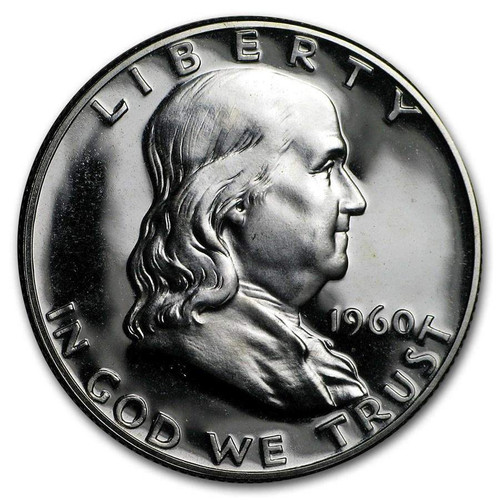 Sometimes referred to as the ‘Franklin fifty-cent piece,’ Franklin Half Dollar coins were minted by the United States Mint from 1948 to 1963. All proof coins were minted in Philadelphia and contain a composition of 90% silver and 10% copper.

The 1960 Franklin Half Dollar proof coin is a stunningly brilliant coin. Proof coins tend to be more valuable than uncirculated and circulated coins because of their exceptional detail and sharp rendering. Proof coins represent the highest quality that a mint can produce. Within the proof category, a choice proof is the third-highest grade of four grades denoting the coin’s condition. Choice coins may contain several hairline marks. The mintage of 1960 Benjamin Franklin half dollar proof coins is 1,691,602.

The 1960 Franklin Half Dollar choice proof coin has a composition of 90% silver / 10% copper. It features a reeded edge and has a diameter of 30.00mm. It weighs 12.50g. The coin’s obverse side features a rendering of Benjamin Franklin in profile view. Mint engraver John R. Sinnock created this image, basing it on an 18th century sculpture of Franklin made by Jean Antoine-Houdon. Sinnock was the mint’s chief engraver and completed his engraving of the founding father in 1947.

Sinnock also designed the majority of the coin’s reverse side, which depicts the American Liberty Bell complete with its famed crack. The engraver died before the reverse could be completed. It was finished by Gilroy Roberts. The reverse side also contains a small eagle situated to the right of the Liberty Bell.