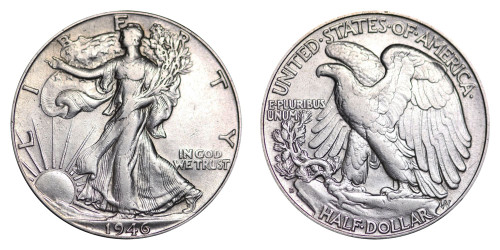 Acquire a rare version of an iconic coins series with this 1946-D Walking Liberty half dollar. The 1946 minted coin, struck at the Denver Mint, is one of the Walking Liberty half dollar key dates for numismatic collectors. It is the creation of sculptor and engraver Adolph A. Weinman and was minted from 1916-1947.  It is made of 90% silver and 10% copper and 1946-D is the lowest mintage of issues between 1939 and 1947. A vast quantity of uncirculated rolls of this date was saved but circulated editions in mint state 66 or above are difficult to find.

Weinman won the commission for the Walking Liberty half from a competition set by the Commission of Fine Arts, as then U.S. Mint Director Robert Woolley asked the Commission to do so, should it dislike the Mint's designs. While Weinman's design was lauded, it was difficult to perfect, which almost resulted in it being recommissioned to Charles Barber who designed the coin series preceding it. It nevertheless went into production and has since inspired other coins, such as the American Silver Eagle.

The Walking Liberty half dollar is donned with the figure of the Liberty on the obverse, the Stars and Stripes flowing behind her, marching across a sunset background while carrying laurel and oak, a symbol of civil and military glory. The reverse has the picture of an eagle almost perched on a mountain pine – symbolic of America – protruding out of a mountain crag. Even though 1916 coins started placing mintmarks on the obverse, by 1946 the "D" mintmark for Denver is seen on the reverse.