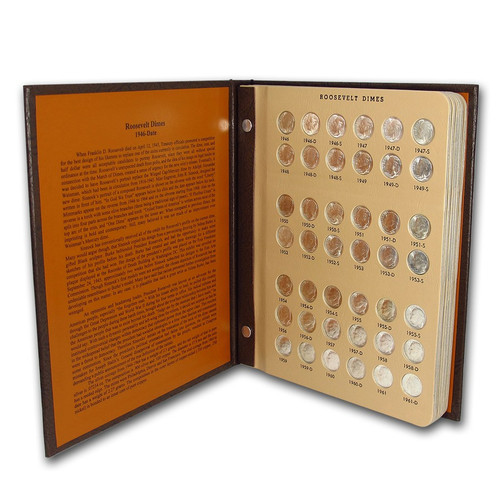 The Roosevelt Dime was minted between 1946 and 1964 and is 90% silver. This Complete Roosevelt Dime set includes every roosevelt silver dime ever minted. They are displayed in a Dansco Album. This is a great set to buy if you’re looking for a complete coin collection at an affordable price!

The Roosevelt dime was created in honor of President Franklin Delano Roosevelt, who died in 1945, aged 63. The president died of polio, and it seemed appropriate to include his portrait on a dime. A fundraising campaign called "March of Dimes" began during Roosevelt's first term as President.

The coin's obverse features the head of Roosevelt and the motto ‘In God we Trust,’ in small lettering. The design also includes the word ‘Liberty’ in larger letters and the date the coin was minted, and Sinnock's initials.

The reverse features three symbols of American freedom and peace; a flaming torch, an olive branch, and an oak branch. The coin also includes the Latin motto ‘E Pluribus Unum.’

The Roosevelt dime was minted in the millions every year between 1946 and 1964. For this reason, there aren’t any exceptionally rare dates. There were, however, some key dates when changes were made to the design of the coin. In 1946 when the JS initial was removed. The Roosevelt dime has been struck at three mints, and many collectors like to collect coins from Philadelphia, Denver, and San Francisco. There have been regular changes as to where the mintmark was placed.

Bullion Shark has assembled a set of forty-eight coins, including coins from all mints. This offers collectors great value for money as you’ll only be paying $7.29 per coin. Some of the key dates, including 1949-S and 1950-S, are valued at $40-50 each. Each of these coins is in fantastic, uncirculated condition and have been graded at around MS63.