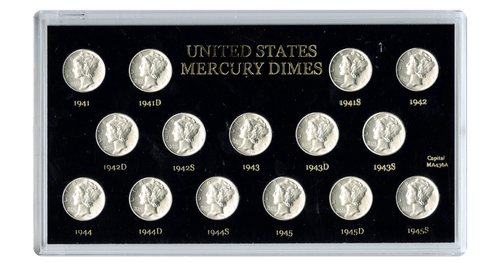 The Mercury dime is one of the most famous and highly sought-after dimes in American history. It was designed by Adolph A. Weinman and was minted between 1916 and 1945. These coins were struck using 90% pure silver and 10% copper and has a diameter of 17.9 mm and a weight of 38.58 grams.

Bullion Shark's set of fifteen Mercury Dimes covers all years between 1941 and 1945. This time was one of the most critical eras in American History as it covers the beginning and end of WWII.

The Mercury Dime is an iconic coin and is one of the most collected American coins of all time. This set contains fifteen coins made from 90% silver, in Brilliant Uncirculated condition, displayed in an attractive holder for safekeeping.

In 1915 a movement was started, which would change the history and design of American coinage. Three silver coins were created, the mercury dime, silver eagle, and the silver quarter.

The coin was initially named the winged Liberty dime as its obverse featured an image of Liberty sporting a winged cap. This hat made Liberty look remarkably like the Roman God Mercury, which is how the dime got its name.

The 1916-D Mercury Dime coin is one of the most famous dimes in American history as it was the first year the coin was produced. First issue coins are often heavily hoarded, but this wasn’t the case with the Mercury dime. This makes the coin very rare today in uncirculated condition. 1921, 1926, and 1931 are all key dates, and these coins are rarer and more appealing to collectors.