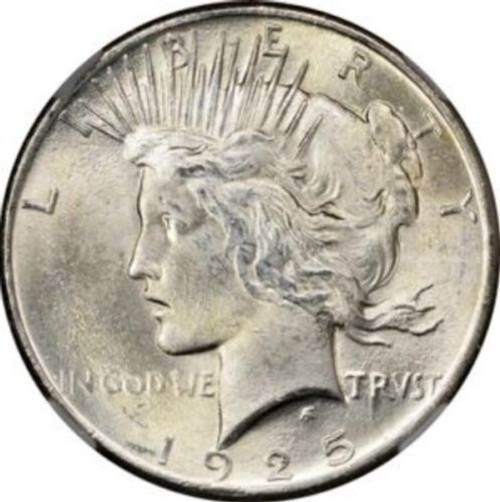 The Peace Dollar came into being in 1921 starting with the high relief and was produced until 1935. There was a short hiatus in production from 1929 to 1933 and then production started once again in 1934 for two more years. The Peace Dollar was designed by Anthony D. Francisci after he had won a competition held by the United States Commission for Fine Arts. He was one of 8 competing artists and was chosen as the ultimate winner. He was given one task, create a silver dollar design that symbolizes peace after the world war. As a result, Anthony designed the obverse of the Peace Dollar to feature a goddess of liberty while the reverse featured a stunning bald eagle.

The 1925 Peace Dollar had a mintage of 10,198,000 coins. Although not the rarest in the series, it is a much lower mintage than the average common date Peace Dollar that can have upwards of 30,000,000 coins minted. Collectors can find a 1925 Peace Dollar in a nice brilliant uncirculated condition for approximately $50. However, higher grade mint state quality coins can cost upwards of $1,000 or more.

Each Peace Dollar is composed of 90% silver and 10% copper. In total, each coin has .7734 ounces of pure silver. Collectors often buy coins such as the 1925 Peace Dollar in either rolls of 20 or as individual coins for their set. Collectors like the idea of collecting bulk silver while getting such rich history for minimal premiums over the silver melt value of each coin. Another reason why collectors sometimes prefer Peace Dollars over Morgan Silver Dollars is because they are on average more affordable and can be purchased closer to the melt value of silver.