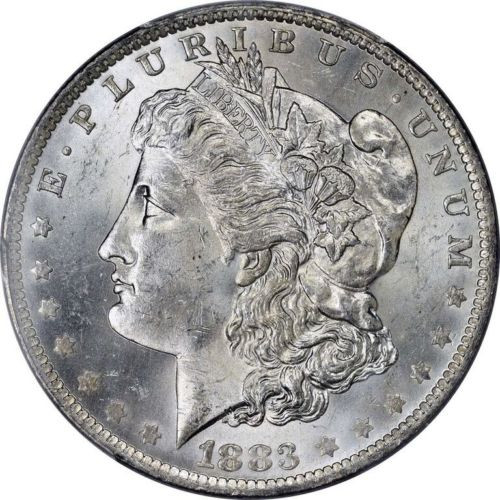 George T. Morgan, the designer of the Morgan Silver Dollar, was first an assistant engraver at the U.S. Mint and he eventually became the Chief Engraver because of his amazing craftsmanship. An American Bald Eagle is featured on the reverse side of the coin, with 7 detailed tail feathers. The Eagle is holding arrows with one talon and an olive branch with the other talon. Lady Liberty’s face is featured on the obverse side of the Morgan Silver Dollar, with 13 stars surrounding her beautiful face, and each star represents one of the original US colonies. Unknown to many, a school teacher named Anna Williams was the model for Lady Liberty.

This coin is a sixth year of issue in the set which means it is highly sought after. The New Orleans Mint produced Morgan Silver Dollars for every year of the series and is known to have produced some of the best struck coins in the whole series. The Morgan Silver Dollar was minted at five different mints over the course of its almost fifty year span. Specifically, the Morgan Silver Dollars were struck at Philadelphia (P) San Francisco (S), New Orleans (O), Carson City (CC), and Denver (D). The Denver minted Morgan Dollar was a special issue because it was only minted in the year 1921.

Each and every single one of these 1883-O Morgan Silver Dollars are in stunning brilliant uncirculated condition. This is incredible when you consider that the coin is 137 years old! Of course the United States would produce such a stunning piece that would stand the test of time. If you would like to add one of these stunning coins to your collection, please feel free to reach out to Bullion Shark. You can purchase this coin online on our website or over the phone at 516-739-5822 by speaking with one of our numismatic experts. Free shipping and handling is included as well.