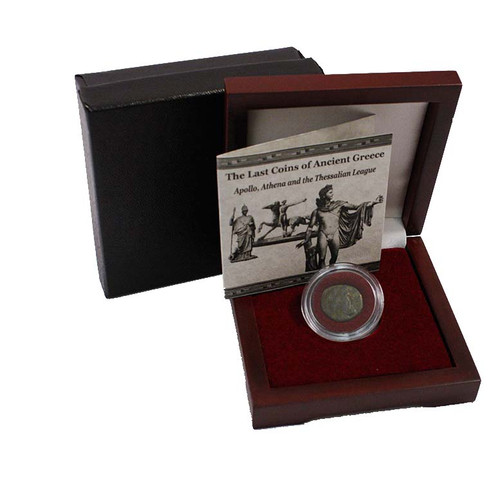 The Thessalian League was an ancient confederation of northern city-states in Northern Greece. It lost its independence to the Macedonians when Alexander the Great was just a young boy. Thessaly was established as an autonomous protectorate over 150 years later. To celebrate its newfound freedom, the Thessalians minted a coin that honored Apollo and Athena, incredible Gods of mythology.

This bronze coin was struck at the mint in the city of Larissa between 196 and 146 BC and features Athena, Goddess of wisdom and victory on the reverse. The obverse featured Apollo, God of the sun and music. Despite being more than 2,300 years old, this coin is in fantastic condition, which is a testament to Greek minting technology! It comes in a sturdy display box along with a storycard and a Certificate of Authenticity. There has never been a better time to add ancient coins to your collection!

Search for the True Cross: Box of 5 Ancient Coins