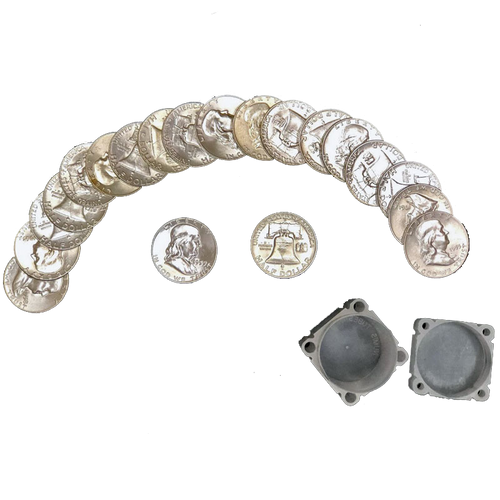 Bullion Shark has created this highly sought-after Franklin Half Dollar collection in uncirculated condition. Each roll has twenty coins from mixed dates.

The set contains a 1955, uncirculated coin, which is very rare and collectible. There was a low number of coins struck in 1955, making this date highly sought after. The Franklin half dollar was produced from 1948 to 1963, which means the entire series contains thirty-five coins. If you purchase this set, you’ll receive over half the collection to add to your portfolio. All the coins in this set are in Choice Uncirculated condition and have been graded at around MS63 or better. The roll includes a mixture of dates.

The Franklin half dollar was struck between 1948 to 1963 using 90% silver and 10% copper. The coin was designed by John R. Sinnock, who was the Chief Engraver at the Mint at the time. The coin's obverse features the head of Benjamin Franklin, and there’s an image of a Liberty Bell on the reverse.

Each uncirculated Franklin half dollar is worth between $24 and $77 depending on the year that it was minted. Whole sets of coins often sell for a much higher price. The coins are worth a lot less in circulated condition and usually sell for between $10 and $18 in good condition. Coins that are worn often only sell for the price of their silver content, which will be determined by the current silver value.