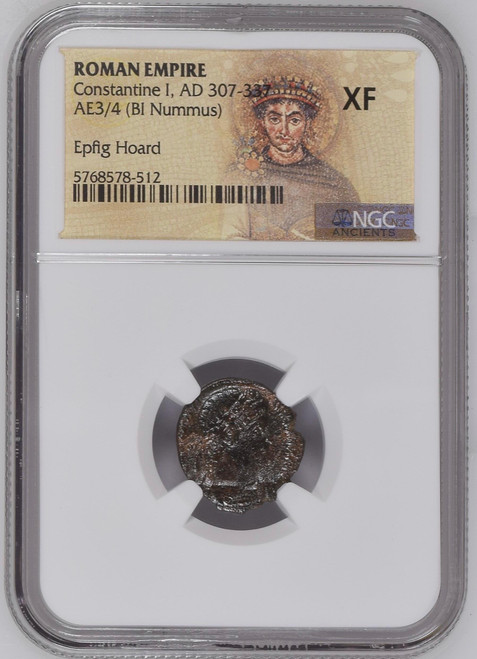 A hoard of Roman bronze coins was buried in the ground in Epfig in today’s Alsace, France. These coins were reportedly buried by Constans himself, former ruler of the Western portion of the Roman Empire! Constans and his generals beat a hasty retreat in order to stop an impending invasion. Not wanting to be encumbered with treasure, one of these generals, or perhaps even Constans himself, buried a hoard of Roman coins in the ground, intending to retrieve it after the war with the Picts. But the general never returned. The coins remained buried in the Alsatian earth until the 21st century, when they were discovered by a crew digging a new sewerage system in the small town of Epfig!
Each of these coins bares the portrait of Constantine I, the father of Constans and worshiper of Sol Invictus, the Unconquerable Sun. After his victory at the Battle of Milvian Bridge, he converted to Christianity. Constantine saw a vision of a Cross and believed that it was the reason for his victory. He merged the two religions after this and authorized the striking of this bronze coin, which aided the spread of Christianity in the Roman Empire. Each 1,700 year old Roman Coin is certified by NGC to be authentic and in stunning XF condition, which is unbelievable considering these coins' age! NGC has denoted that these are from the Epfig Hoard right on the certification label! This is a story you don't hear about every day!
P.S. - The detail on these coins in unbelievable! They are just very difficult to photograph.
×