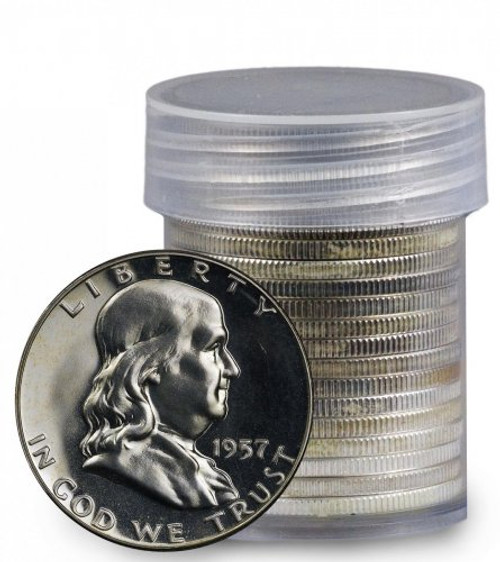 Grab this roll of 20 coins that are all in Choice Proof condition meaning that they are all graded at PF63 or higher. All coins in the roll are from between 1960 and 1963. The Franklin half dollar bears an image of American founding father, Benjamin Franklin. These coins are from the last years that the Franklin half dollar was minted as it was replaced in 1964 by the Kennedy half dollar.

History of the Franklin half dollar

The Benjamin Franklin half dollar was struck by the US Mint from 1948 to 1963. Nellie Tayloe Ross was the mint director in 1947 and she greatly admired Benjamin Franklin. She commissioned the mint's chief engraver, John Sinnock, to design a coin with an image of Franklin on the obverse. John Sinnock died before completing the project, so the final design was actually created by his successor, Gilroy Roberts. The reverse of the coin features the Liberty Bell and clearly shows the crack in the bell which earned disapproval from the Fine Arts Commission. This coin attracted further controversy as it includes Sinnock's initials "JRS", which many people felt was a tribute to Stalin. The mint released a statement explaining the initials and the original design was used until 1964 when the coin was replaced by the Kennedy Half Dollar.

Each 50 cent piece has a reeded edge, is 1.55mm thick, is 30.68mm wide, and weighs 12.5g.  The obverse of the coin features an image of Benjamin Franklin with flowing hair and is a relatively simple design. The reverse contains the Liberty Bell along with a small eagle in one corner.

Franklin half dollar value and mintage

Between 1960 and 1963, coins were only struck at the Denver and Philadelphia mints. 187,226,827 coins were minted during this time period. Coins with the "D" mark do have a higher value to collectors as fewer coins were minted in Denver. The coins were struck from 90% silver which adds to their numerical value. These coins are generally valued between $20 and $30 depending on the condition.