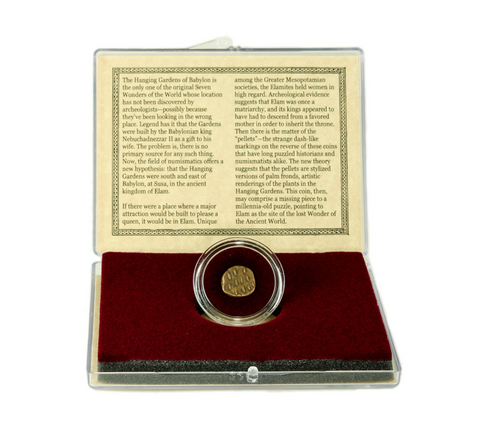 The lost wonder of the ancient world, the famed Hanging Gardens, were not located at Babylon, as originally thought, but at Susa, in the Biblical realm of Elam according to some theories. The answer to the riddle lies in the strange markings on this ancient Elymais coin. The Hanging Gardens of Babylon is the only one of the original Seven Wonders of the World whose location has not been discovered by archaeologists—possibly because they’ve been looking in the wrong place. Legend has it that the Gardens were built by the Babylonian king Nebuchadnezzar II as a gift to his wife. It is theorized that the pellets on the reverse of the coin are stylized versions of palm fronds in the Hanging Gardens. This coin may actually hint to Elam as the site of the lost Wonder of the Ancient World. It is not very often that a coin is a puzzle piece to an ancient mystery! Add this to your collection and spread the word of this ancient tale.

Search for the True Cross: Box of 5 Ancient Coins

Currency World Tour: 50 Coins from Around the World (Clear Box)

The Coin of the Renaissance Clear Box