In 1971, following legislation passed the prior year, the U.S. Mint began issuing a $1 coin for the first time since 1935 when the Peace dollar series ended. The new coins, known as Eisenhower dollars, were made in the same copper-nickel composition as the dimes and quarters you receive in change and were the same hefty size as the old silver dollars. They are made of outer layers of .750 copper and .250 nickel bonded to an inner core of pure copper. 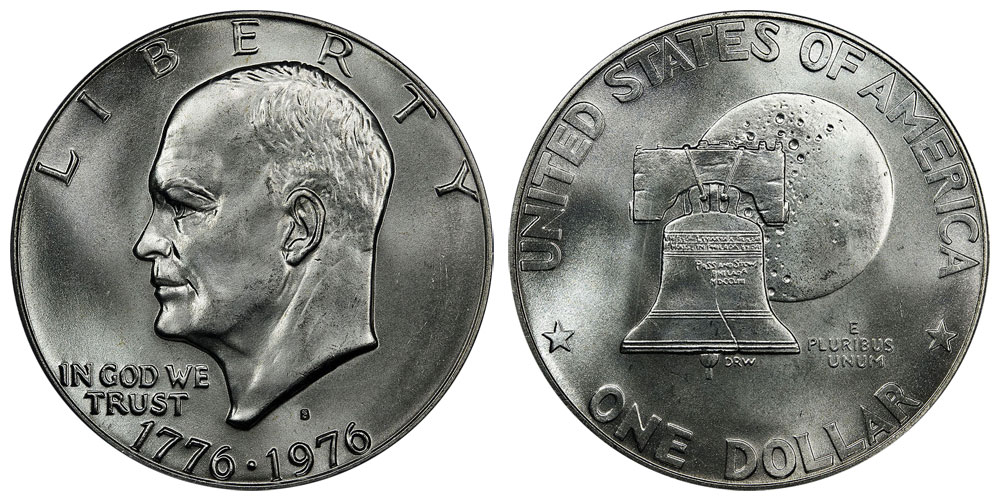 The coin was issued as a tribute to popular World War II general and former president General Dwight D. Eisenhower, also known as Ike, whose left-facing bust appears on the obverse. The design was inspired by a sketch artist Frank Gasparro made of the general after a 1945 parade for World War II.

The reverse honors the 1969 Apollo 11 landing on the moon and is also designed by Gasparro, who then served as Chief Engraver at the Mint and based it on the Apollo 11 mission patch designed by one of the crew’s members, Michael Collins.

In 1975 the reverse was redesigned by art student Dennis Williams to mark the nation’s bicentennial with dual-dated coins (1975-1976) that show the famous Liberty Bell from Philadelphia in front of the moon, which were issued in 1975 and 1976. Like the quarters and half dollars of this type, they were very popular with the public and collectors.

150 million Eisenhower dollars were struck in 40% silver for collectors in two versions: mint state Ike dollars in blue envelopes, and Proof Eisenhower dollars sold in plastic cases with a black background which were then placed into a brown box. Thus, there are blue and brown 40% silver Ike dollars as well as silver bicentennial Ikes. Each consists of outer layers of .800 silver and .200 copper that is bonded to an inner core of .209 silver and .791 copper, creating a new silver weight of .3161 ounces.

As a circulating coin, Eisenhower dollars were mostly a failure except in areas of the country like Las Vegas and others that have casinos, where 70% of the clad coins ended up. The first year they were issued, Eisenhower dollars were hoarded by the general public because they were new, and because Ike was so widely admired as a president and wartime leader. But most Americans did not like carrying around large, heavy coins, which is why the series only lasted until 1978. By that time over 640 million of the coins had been struck.

From the time the first 1971 Eisenhower dollars were struck, problems were encountered from the stress the large clad coins put on the dies, which resulted in many examples of poor quality. This also led some collectors to acquire rolls of the coins from banks to search for better-quality coins.

In addition, production issues necessitated a reduction in the design’s relief, strengthening of the design and giving the Earth on the reverse better definition.

These changes also resulted in the numerous and complex die varieties that exist of Eisenhower dollars, especially for the 1972 Eisenhower dollars, whose type 2 variety is the series key made in error by using dies intended for proof coins. Only 2,504 of those coins exist.

Towards the end of the series, the government concluded that since the large coins did not circulate much, they needed to issue a new dollar coin with a smaller diameter, which led eventually to the Susan B. Anthony dollar’s debut in 1979.

For collectors, Eisenhower dollars remain a favorite modern coin series that can be can be easily if you just want an example of each date, type and mint mark, which can be had for a little over $300. But a full set with major varieties in MS66 is over $20,000!

It is much more challenging to collect if you are interested in scarce die varieties or want each coin in high grade, which gets expensive since a large clad circulation coin has large fields prone to acquiring contact marks. In fact, there are no MS70 Ikes, yet there are coins in the series worth over $10,000.

In terms of the history of U.S. coinage, Eisenhower dollars should be understood in the context of the period when they were issued when the Mint had ceased issuing 90% silver coins because their intrinsic value exceeded their face value. They were issuing copper-nickel coins instead except for the Kennedy half dollar still being made from 40% silver, and the Ike dollar as the largest clad coin ever struck was issued to help keep the Mint relevant to the new era of clad coinage.

But the coin has been underestimated as a collectible ever since it was issued, making it a series that is ripe for discoveries from high-grade examples of the better dates to errors and new varieties. And the main reason there is so much potential in this regard is that the series is endlessly complex when you really get into it and arguably the least well studied and understood modern coin series.

According to CoinWeek editor and Ike dollar expert Charles Morgan, the series is: “the greatest achievement in clad coinage in U.S. history. It was the most technically challenging coin ever attempted (sorry, Saint-Gaudens; your 1907 Double Eagle was spectacular, but try to churn out eighty million Eisenhower dollars on Army surplus presses) leading to a number of modifications and revisions, some of which are only now being identified by experts – and it is a series like this that calls into question how much experts really know about modern coinage.”

In 2012 CAC (the Certified Acceptance Corp.) that reviews the condition of coins to see if they are at the high end for their grade in which case they receive a green sticker -- decided to include silver and clad Ike dollars for this service because of the large disparities that exist in the quality of coins of the same grade.

If you decide to specialize in this great modern series, consider joining the Ike Group (https://www.ikegroup.info/), which maintains lots of information on Eisenhower dollars.