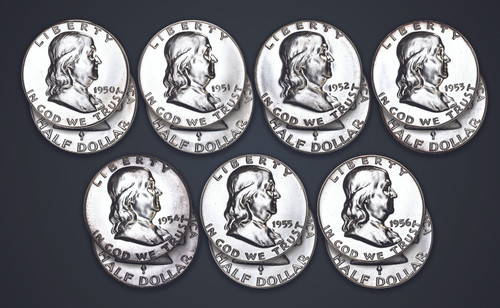 The Franklin half dollar series was the first half dollar to include a portrait of a real figure – other half dollars had featured metaphorical figures signifying liberty. U.S. Mint Director Nellie Tayloe Ross long admired Benjamin Franklin and wanted the founding father on a coin. The Franklin series was minted between 1948 and 1963, and proofs were minted from 1950 and only at the Philadelphia mint. The Franklins are popular as they are the last half dollar series to all be made with 90% silver.
1950-1956 are some of the hardest years of the series to come by. In this set you will get one choice proof per year in stunning choice proof condition. This incredible set is the perfect way to add stunning silver to your collection.
Highlights:
×