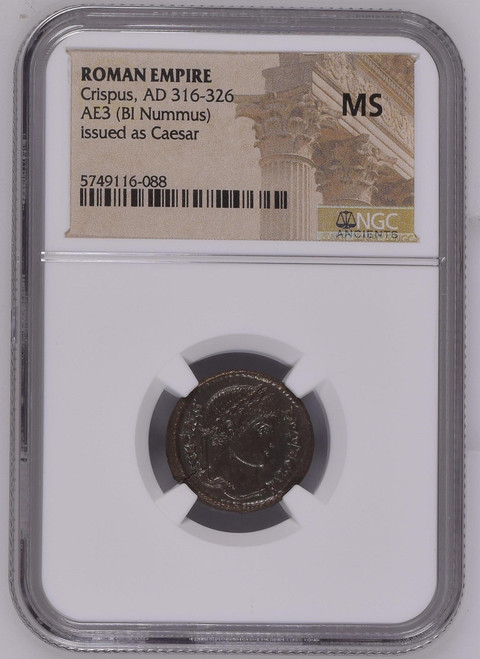 This is the best coin you've never heard of! Flavius Julius Crispus was the eldest son of the Roman emperor Constantine the Great and his junior emperor (caesar) from March 317 until his execution by his father in 326. The grandson of the augustus Constantius I, Crispus was the elder half-brother of the future augustus Constantine II and became co-caesar with him and with his cousin Licinius II at Serdica. Crispus ruled from Augusta Treverorum in Roman Gaul between 318 and 323 until Constantine became the sole augustus and the Constantinian dynasty in control of the entire empire. On the 20th anniversary of Constantine's reign, Crispus was put to death.

This Bronze coin dates from 317-326 AD. It is NGC Certified to be authentic and in MS condition. Yes, MS! Have you ever seen a MS ancient before? The details are so fresh it is like it was struck yesterday! It's hard to find Morgan and Peace dollars in this condition, and they are only 100 years old! A 1,700 year old coin in this amazing a condition is truly a diamond in the rough!
Highlights:
×