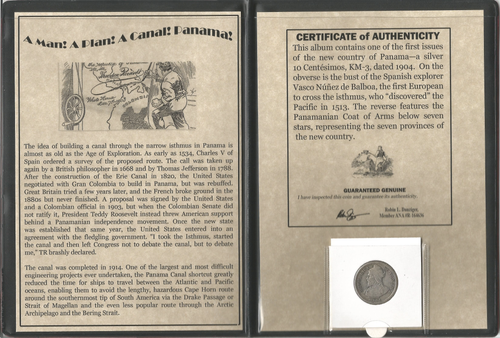 This album contains one of the first issues after Panama was formed as an independent state. A 1904 silver 10 Centesimos coin is the centerpiece of this album. The obverse depicts a bust of the Spanish explorer Vasco Nunez de Balboa, the first European to "discover" the Pacific in 1513. The reverse features the Panamanian Coat of Arms below seven stars, signifying the seven provinces of the new country of Panama.

The album also includes a detailed story card describing the independence of Panama and the long history of creating the canal passageway, as well as President Teddy Roosevelt's staunch involvement in its creation after centuries of attempts. Also included is a certificate of authenticity. Every history buff will want this in their collection!

The Money of the Jolly Rodger (Pirate Money Mini Album)

The Coin of the Grandmother Queen of Europe (Mini Album)