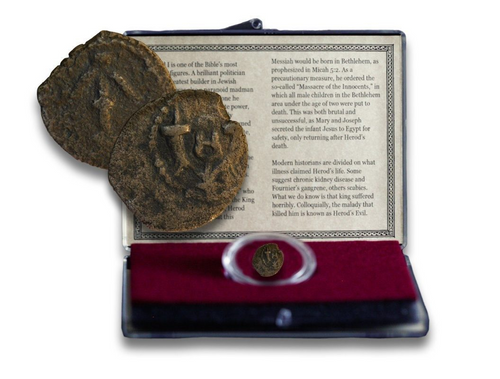 Herod I is a complex and important ruler from the New Testament. Crowned King of the Jews by the Roman Senate, Herod ruled from 40 BC until his disease-ridden death 36 years later. He is the famed king visited by the Three Wise Men. Thus, his jealousy of being usurped by the mythical new "King of the Jews" started the series of trials in Jesus' life leading up to him becoming the Messiah.

Several types of bronze prutah coins were minted in Herod's name during and after his reign. They were all crudely minted in small quantities as with the era's technology. Herod made an effort to portray pagan Roman and Greek themes while at the same time satisfying local traditions, as depicting animate objects was forbidden. This coin is the most common design, depicting a double cornucopia and a central caduceus on one side and an anchor on the other. Certified to be authentic and stored in a clear display box with a featured image, this is an incredible way to own an ancient coin for cheap!