Corporate Might: The Most Powerful Companies of All Time - 2 Coin Set 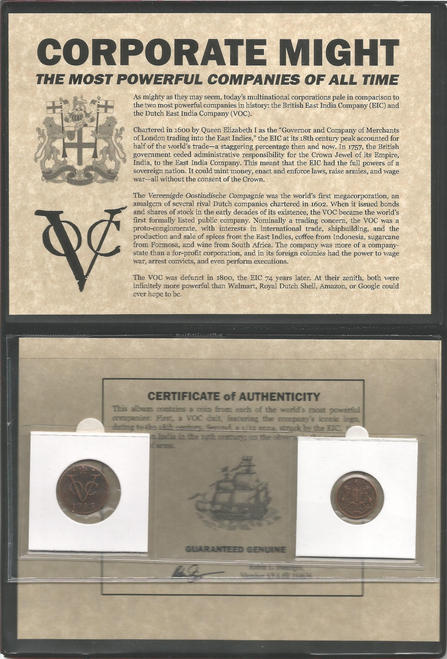 Corporate Might: The Most Powerful Companies of All Time - 2 Coin Set

The Dutch East India Company and the British East India Company were at one point in time the most powerful and prosperous companies in the world. They accounted for 50% of the world's trade at their height, which is something the behemoths such as Amazon, Walmart, and Alibaba could only hope to achieve in this day and age. This album contains a coin from each of the world’s most powerful companies: First, a VOC duit, featuring the company’s iconic logo, dating to the 18th century. Second, a 1/12 anna that circulated in India in the 19th century; on the obverse is the company’s regal coat of arms. Each set comes with a certificate of authenticity and a detailed history card of the companies. Add this fantastic relic of global trade to your collection today

The Most Powerful Woman Who Ever Lived: Box of Silver Roman Denarius of Julia Domna

European Coins: A Set of 25 Different Coins (U)

Bird Coins of the World: A Set of 40 Coins