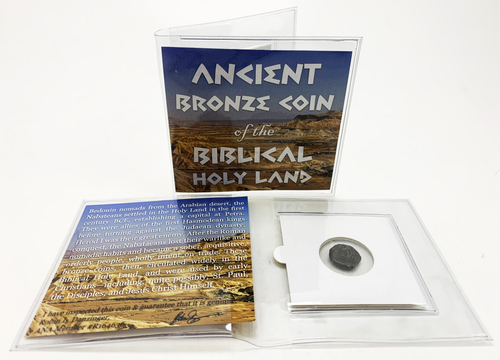 These coins are relics of the Biblical Holy Land! The Bedouin nomads are from the Arabian desert, and were allies of the first Hasmodean kings before turning against the Judaean dynasty. The Hasmonean Kings are known for successfully rebelling against the Seleucid kingdom and establishing a fully autonomous Jewish state, ensuring the continuation of the Jewish religion.  Even though Herod I was the Bedouin nomads' greatest enemy, they turned against Judea.  After the Roman conquest, they became a timid people that focused on trade.

These bronze coins circulated heavily in the Biblical Holy Land, and thus were used by early Christians. This could possibly include Jesus, St. Paul, and any others referenced in the New Testament. These coins were struck crudely and include a wide variety of types. With a certificate of authenticity and story card, you can feel the biblical history that these coins have lived through!

Journey of the Magi: 3 Coins from the Biblical Holy Land Box

Coin of Hyderabad - Land of the Diamonds (Mini Album)