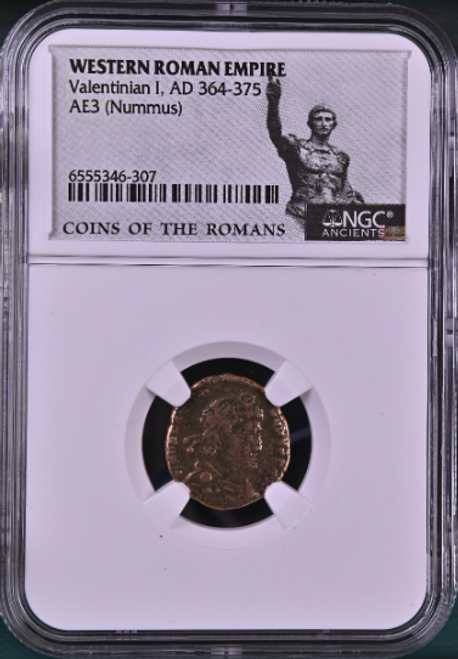 This AD 364-375 Bronze Roman Nummus is a relic of the reign of Valentinian I. Also known as Valentinian the Great, he was a strong soldier turned Emperor. He made his brother Valens his co-emperor, giving him rule of the Eastern empire through Constantinople while Valentinian retained the West. He ruled from Milan, as he found the Senators in Rome bothersome, and Roman grandiosity conflicted with his Christian values. His brilliant general Count Theodosius defended the empire from many conspiracies and revolts. Valentinian I then  founded the Valentinian Dynasty, with his sons Gratian and Valentinian II succeeding him in the Western half of the empire. Certified authentic by NGC, this piece is also holdered with a special Coins of the Romans label. This coin marks the beginning of an important Roman dynasty, so it will make an excellent addition to your collection!