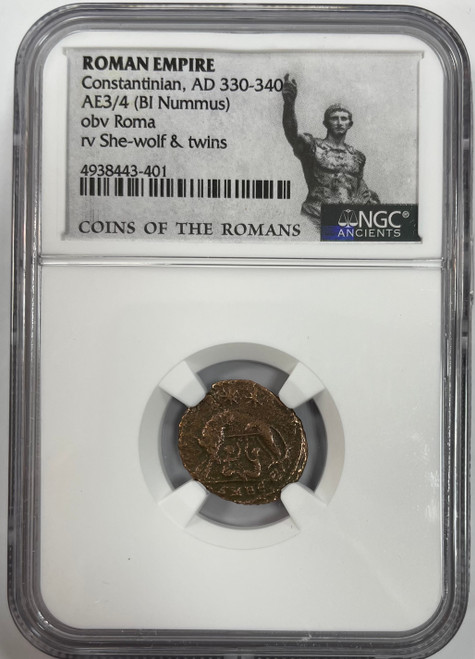 Ancient Roman society was full of rich lore. Legend stated that Romulus and his twin brother Remus were destined to found Rome. An evil deposer, king Amulius, tried to drown the infants to remove the threat of their royal birthright. The infants, however, washed up on the bank of the Tiber River and survived with the care and nursing of a kindly lupa or "She-wolf". Romulus then went on to found Rome, one of the most prolific empires in history. While just a mythological story, it grounded Rome as a divine empire.

These 1,700 year old coins feature the portrait of Romulus and Remus with the lupa. They are also the first Roman coin without the name and portrait of the emperor on the obverse. These Billon Nummus of Constantinian have been certified by NGC to be authentic and from AD 330-340. They have also been holdered with the Coins of the Romans label, which highlights the incredible history of the empire. This coin is so cheap and full of history and lore, so don't wait and add it to your collection today!