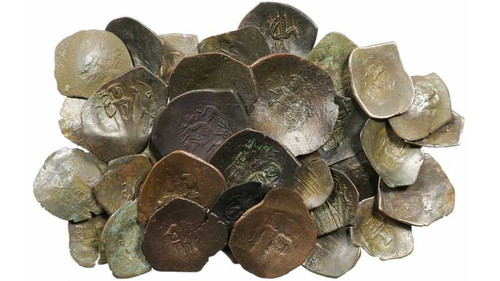 In 2014, the US Mint released the FIRST ever curved coin to commemorate the Baseball Hall of Fame. Except, that wasn't actually the first curved coin in history! During the Byzantine era, around the 11th Century, coins started to become concave under the reign of Michael IV. By the 12th Century, coinage was entirely cup shaped!

The cupped design was used to increase the structural integrity of the coins as they got progressively thinner and made of more alloys instead of purer metals. These mixed date Byzantine Cup Coins are from anywhere between the 9th-13th centuries. They feature a portrait of Jesus Christ or The Virgin Mary on one side, and the ruler of the period on the other. Add these fascinatingly different coins to your collection today!

*You will receive (1) coin per order. The above image is a stock photo to show the different type and quality.*