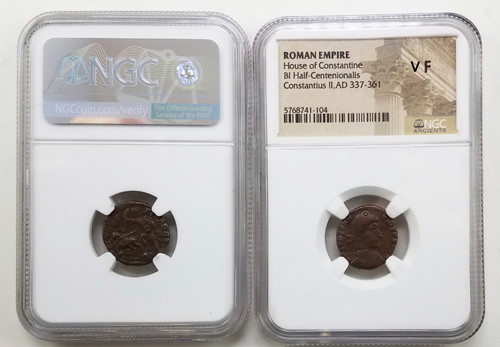 When we think of Rome, we often think of the Gladiators. Crowds of people watched these professional fighters battle with frenzied animals, criminals or even each other. Emperors sponsored the gladiatorial games. Some aspects of these "games" have been passed down to modern rugby and football. Constantius II, Constantine the Great's son, was one of the biggest fans of the gladiator contests. When it was his turn to mint coins, he had his portrait put on the front and a gladiator about to slay his opponent on the reverse. This 1,700 year old Roman Coin has come to be known as "The Gladiator Coin." Each coin is certified to be authentic and in Very Fine condition by NGC.