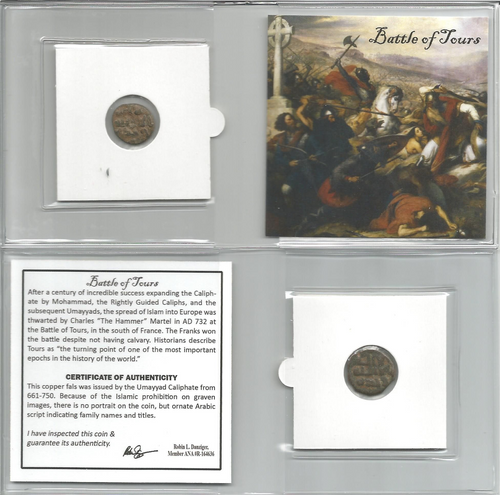 After a century of incredible success expanding the Caliphate by Mohammad, the Rightly Guided Caliphs, and the subsequent Umayyads, the spread of Islam into Europe was thwarted by Charles ”The Hammer“ Martel at the Battle of Tours in the south of France. The Franks won the battle despite not having calvary. This copper fals was issued by the Caliphate from 661-750, and due to the Islamic prohibition on graven images, there is delicate Arabic script on the coin as opposed to a portrait. This incredible historical artifact exudes the heat and passion from the battle. Each coin comes with a story card and certificate of authenticity.

The Battle To Save Europe: 1687 Album

The Coin of the Grandmother Queen of Europe (Mini Album)

Coin of Hyderabad - Land of the Diamonds (Mini Album)